I was looking at Jen’s blog at IHeart Organizing and I got inspired to do some organizing of myself. The semester will be over soon so then I will be living with my fiancé full-time. Right now, I’ll be honest, the place is somewhat of a mess! I just need to find simple and easy ways that we can keep the place organized. The first place I decided on was the freezer and fridge. Our freezer is very tiny so I needed to do something!!! I was reading on Jen’s blog about containers and how they are great for everything.

So here is a picture of my freezer before I organized it. 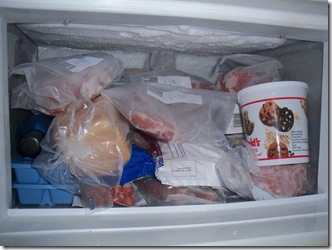 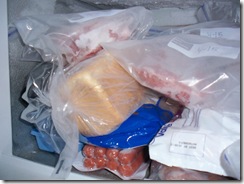 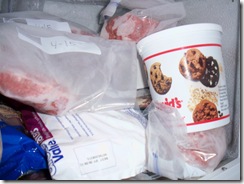 You can see that everything is just thrown in there and you have to take a lot of things out just to find what you’re looking for.

Now here are the pictures of the freezer after I organized it. 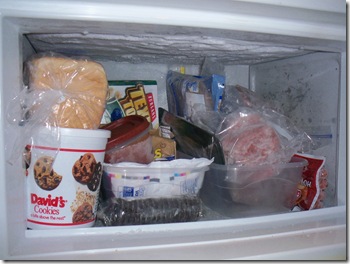 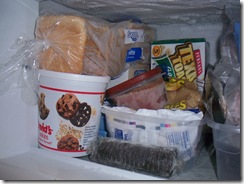 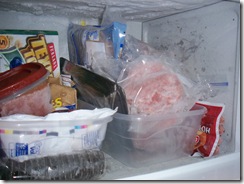 I got two totes that came with lids (I didn’t use the lids so I just kept them for future use). I put the meat in the one on the right and the other one has garlic bread, tater tots, and a thing of frozen tomato sauce. The on the very left are two ice cube trays, the bread on top of that and then a container of frozen cookie dough that I bought from my cousin.

I love how the freezer looks now because it will be easier to find things!! Here is a side-by-side view of the before and after. 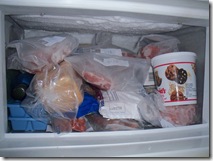 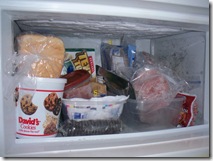 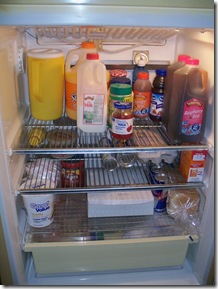 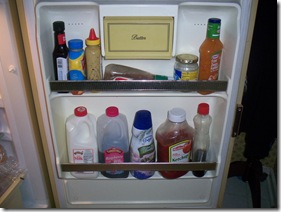 Trust me, my fridge looks a lot better now than it did before. I will definitely be able to find things a lot easier.

Up next, I think I want to look into getting something to put all the stuff on our kitchen table.
Wouldn’t you say that this mess needs fixed desperately?? 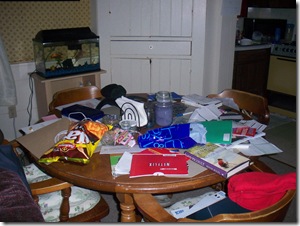 Thanks for reading!!! Leave me comments and any ideas you have for me!  Have a great Saturday!!! Idols- Where are they now?

For this post, I decided to write about Justin Guarini. He was the runner up on the very first season of Idol. I actually decided to write about Justin because I just got a tweet the other day that he just became a dad. In February 2009, he announced his engagement and then on September 26, 2010 they were married. Then on April 26, his wife, Reina Capodici, gave birth to a seven lb, 2 oz boy.
Since being on Idol, his debut album was out in 2003 which also came out around the same time as the movie he co-starred with Kelly Calrkson, From Justin To Kelly. The movie didn’t do that well, but I loved it! I’m probably the only one who did! 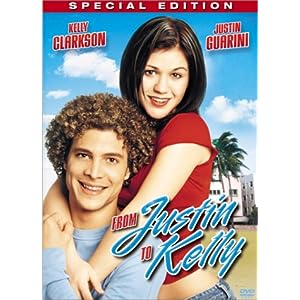 His album only sold 134,000 copies and then in December 2003, he was dropped from RCA Records. In December 2005 he released his second album Stranger Things Have Happened that he produced himself through his own production company, Justice Entertainment, Ltd.. In 2010  he was cast in his Broadway debut as Carlos in the Broadway show Women on the Verge of a Nervous Breakdown. He also played a part in the Broadway show American Idiot, which just closed on April 24 of this year. He is going to star in a production of Rent in Beach Haven, New Jersey from May 28-June 19.
I can’t really find anymore information on Justin so I don’t know if he is currently working on another album or anything.
Here is a picture of him from his first audition on American Idol.

Then here is one in 2007, comparing his hair to when he was on Idol. 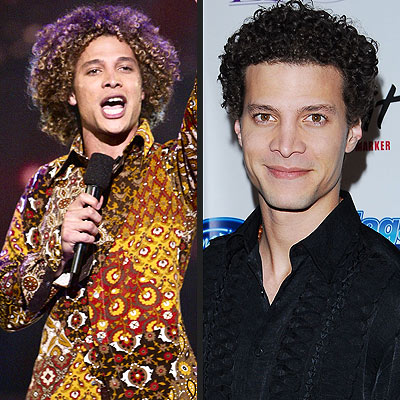 Then this is a picture of Justin, his wife, and his wife’s daughter.

That’s all for this edition of “Idols-Where are they now?” Stayed tuned for the next one! And if you haven’t already, link up to my blog hop! I will be closing the linky later tonight and then picking a “Featured Blog of the Week” to be featured on next week’s blog hop. Have a great Friday everyone!!!

It’s time for the results

Results show…someone must go. That was pretty cool that they got to go to England. That was a first for the show.

Woah, it’s Crystal Bowersox…who is she?? The only time I’ve heard about her recently is in the diabetes commercials. But other than that, I don’t know what she’s up to at all.

Alright, time for the results. I’m wrong already because I said Haley would be in the bottom 3 and she isn’t. James is the next one safe, which I figured. As is Lauren, duh! And then Jacob is safe, so it’s down to Casey and Scotty!!!

The person leaving us tonight is…Casey!!! Yay!! I was right about the results again!!!

Well, we are down to the final 5. It just keeps getting harder, and harder to figure out who is going to leave.

Well, that’s all I have for now. Oh, one more quick thing. The American Idols Live Tour dates have been announced!!! I can’t wait!!!

I didn’t get to watch Idol live tonight because I went to the mall with some friends. It’s the end of the semester and we just wanted to go do something besides being stuck on campus. Tonight the theme was Carole King. I’m not sure I know too many of her songs. I’ll probably only know the songs if they’ve been done on Idol before.

Jacob was first singing “Oh No Not My Baby”. I actually liked this performance from him. I didn’t like all of it though. There were some parts where he was singing high and it sounded a little bit pitchy.

Lauren sang “Where You Lead”. Like anything from Lauren, I really like it!! That was awesome when she brought the guy onstage and had him sit on the stage and then she sang to him.

They had duets on the show tonight. My guess is that they just needed space to fill so they decided to have them do duets. The first one was Haley and Casey singing “I Feel the Earth Move”. I liked it when they were singing separately, but I don’t think their voices fit that well together. Overall I didn’t like it, because when it comes down to it, a duet should sound good when the two people are singing together.

Back to the individual performances, we heard Scotty sing “You’ve Got a Friend”. As always, he put his country twang into the song and it sounded great!!! It’s almost like he’s been doing this for years!! He is a great singer!!!

James was next with “Will You Still Love Me Tomorrow”. I loved how he sang the first part of it a capella! Singing a capella shows you are a good singer because it’s hard to sing a capella. As with all of his other performances, I loved it!!

Lauren and Scotty sing the next duet with “Up On the Roof”. This should be really good since they’ve done duets before and sound great together!! And I was right, it was awesome!

Up next was Casey singing “Hi De Ho”. I liked in the beginning how he played a few notes on the piano as he was singing. I thought overall the song was alright. It was definitely one of my least favorites from him.

Haley sang “Beautiful”. I thought that was a good song choice for her. What I still can’t believe is that I’ve been wanting her to leave for a while, and now I actually like her and would probably be a little sad to see her leave. I want her to make it farther than Jacob and Casey.

So they wrapped up the show with James and Jacob singing “I’m Into Something Good”. This performance felt like Casey and Haley’s performance. I don’t think their voices sounded that good together. It sounded kind of cheesy at parts. I liked James’ parts of it though, obviously! And I thought that was funny when they spun Jennifer’s chair around and sang to her and then when they went back to the main stage you saw Randy and Steven pull her back to the table. I’d say overall it wasn’t the best duet of the night.

So I’d have to say my favorites of the night were Lauren, Scotty, and James. I think that the bottom 3 will be Jacob, Haley, and Casey. Then I think that Casey is going to leave. 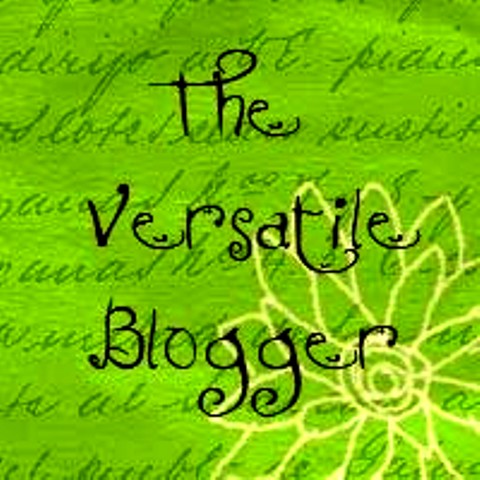 -Tell us seven things about yourself.

So here are my 7 things about me:
1. I have 3 fish that I won at a fair: Edward, Bella, and Jacob.
2. I don't wear them that much, but I love wearing dresses!!
3.  I love taking pictures!!
4. I am obsessed with flavored water, especially the new product called MiO
5. I will be a senior in college in the fall!!
6. I’m getting married in 2 years!
7. I wear the same jewelry every day except for my earrings which change from time to time.

I did this last week, so I thought I’d keep on doing it every week. 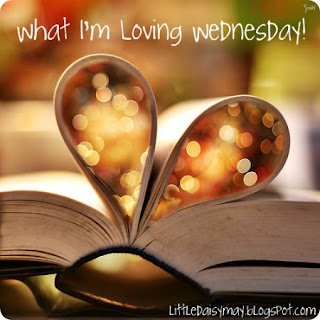 I'm LOVING that the end of the semester is almost here!!! I have 5 classes left and then finals start!!

I'm LOVING my new dress I bought from Walmart last night!!! I can't find a picture of the dress online, otherwise I would totally share it!!

I'm LOVING how nice the weather has been!! I think the warm weather might be here to stay. Fingers crossed!

I'm LOVING that I get to see my fiance's family two weekends in a row!!!

So this is something that my local radio station, FM97, was talking about on-air about a month ago. I think personally, it wouldn’t matter to me if the babysitter was a male or female, as long as they can be trusted with kids. Babysitting is a job that most people think is only for women, but I think men could do it, too. So I would say for this one, that I wouldn’t really care if I hired a male or female babysitter.
So what do you think? Vote in the poll and leave me a comment letting me know what you think about this.

Links to this post
Email ThisBlogThis!Share to TwitterShare to FacebookShare to Pinterest
Labels: Blog hop, Blogs, Wednesday, Would you rather
Newer Posts Older Posts Home
Subscribe to: Posts (Atom) 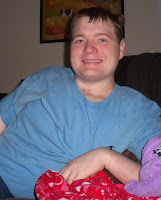